About our Founder, Dr. June d’Estelle

“Dr. June d’Estelle is an extraordinary woman of abundant spiritual insight and strength. Her esoteric programs and personal transformation studies have led me along paths of ever-expanding consciousness. The Alohem Center is in the world and all is well.” 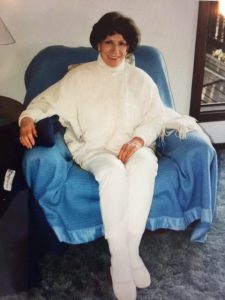 Dr. June d’Estelle is an acclaimed Master Teacher, Spiritual Leader, Lecturer, Visionary, and Author. She synthesized over forty years of study, experience and inspiration into a unique system of instruction. The evolving Illuminated Mind Seminars are stimulating, life altering and remarkably effective.

She has instructed thousands of students. Many of them have studied with her for decades, continually awed by the depth of her wisdom. Her book, The Illuminated Mind: A Step-By-Step Guide To Spriritual Discovery, explores material presented in her seminars. June has created a legacy that continues to elevate humanity.

June was born and raised in California, blessed with exceptionally loving, supportive and spiritual parents. The family lived in the San Francisco Bay Area until June was five and then moved to small towns in Northern California and later to Los Angeles. Scholastically, June did well, and upon graduation from high school was offered a choice of several four-year scholarships. She decided to forego college at that time in favor of marriage to Myron E. Glenn

June’s new in-laws, Myron W. And Mary Glenn,   were also remarkable and were steeped in metaphysics and spiritual study. Her marriage was happy and loving until World War II intervened. June’s husband, an electrical engineer, was sent overseas and spent years in the Navy. Their marriage did not survive the war changes and eventually they divorced.

Later, June married a medical doctor, Wesley W. Hoskins. They each brought  three children to the marriage –  Carole Glenn, Jeffrey Glenn, Lauren Glenn, and Mary Hoskins, Larry Hoskins, and Jonathan Hoskins. The birth of their youngest son, Alan Hoskins,  resulted in a blended family of seven children. The children are all best friends and have grown into productive adults. June was involved in the many interests of an active, dynamic family and in community affairs. The family enterprise consisted of breeding, training and showing Arabian horses. 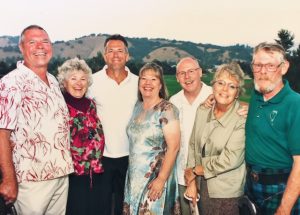 In 1971 June was diagnosed with cancer of the scapula. An appointment was set for some months in the future for a visit to the Mayo Clinic. She was also suffering from severe allergies. A friend invited June to visit a healer/chiropractor (the late Dr. James MacKimmie, author of Presence of Angels: A Healer’s Life) who assisted many people with allergies. June was told that her allergies were nutritional. Her body was toxic from an abundance of coffee, chocolate, dairy, refined sugar and grains, and from cooking with aluminum pots and pans. She returned home, immediately made changes to her diet, and purchased stainless steel cookware. Her allergies disappeared.  June did not mention her cancer of the scapula to Dr. MacKimmie. 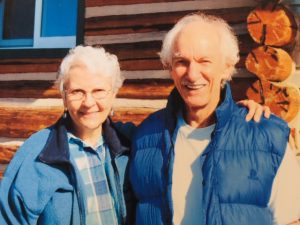 June had a visit with her orthopedic physician at University of California Medical School in San Francisco before leaving for her appointment at the Mayo Clinic. She mentioned that her shoulder was feeling better, so the doctor took an x-ray.  He returned and told June, “Look at this!” Indeed, the cancerous holes in her scapula were beginning to fill with new bone growth.

The Mayo Clinic appointment was cancelled. The physician told June that had she gone to Rochester, NY, her scapula and her arm would have been removed and she would have been sent home to make final plans for her transition. The doctor asked what she had been doing differently. She was hesitant to tell an MD that she had been to see a chiropractor.  Finally, he told him about her allergies and visit to MacKimmie. He replied, “You be sure to thank this man, because he saved your life.”

When she saw Dr. MacKimmie next, he said, “How does your shoulder blade feel?” She was amazed since she had not mentioned the scapula cancer. He said, “It was not my doing. It was given that you should be healed. I was just a funnel for God’s healing energies.”

With this major event, June’s love of metaphysics and spirituality returned full force. It became incompatible with the lifestyle of a medical doctor’s wife. Finally, she told her husband what had happened.  Wesley said, “You went to a chiropractor?  You went to a faith healer?”  He was outraged and they eventually went their separate ways.  In 1971 June  returned to school.  She attended Foothill College in Los Altos, California. 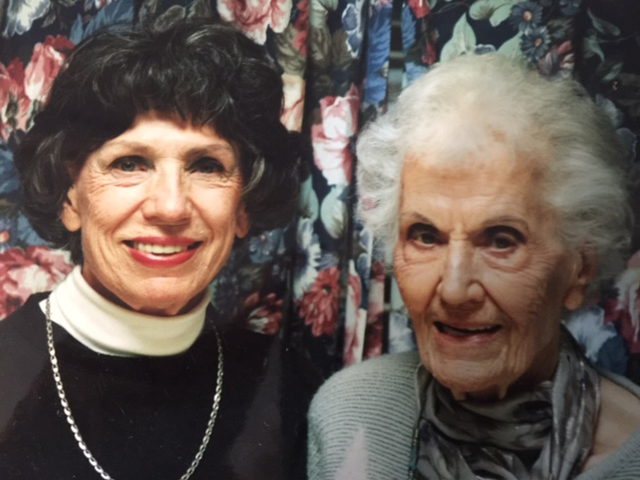 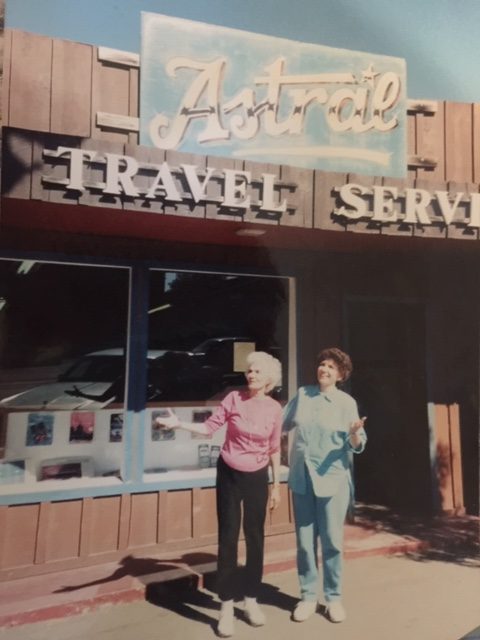 She and her friend, Della Heide,  were interested in attending Sonoma State University in Sonoma, California, but there was a long waiting list to get into the psychology department.  June called the school and happened to talk with the head of the department.  She asked that she and Della be put on the waiting list for next year.  The head of the department said, “I have just come from a department meeting and we decided to add two more people for the next semester.  So, the first two people to send in their paperwork will be accepted.”  June immediately called her friend and said,  “Della, grab your paperwork!  We’re going to college!”  And they did!

June studied with a broad array of exceptional teachers and explored diverse disciplines. She founded the Alohem Center for Transformational Studies and developed the Illuminated Mind Seminars which assist participants to awaken their own Divine Beings. She conducted seminars in various cities throughout the United States and Canada. These seminars, with their traveling and other related aspects of teaching, occupied the major part of her time and interest until her retirement in 2010.

My parents and grandparents bequeathed a solid esoteric Christianity background to our family, exemplifying and instilling the true essence of Christ’s teachings: the importance of Divine Love; that God is Love, that we are to love God, one another, and ourselves. They were very active in their support of their Protestant Church, living that Love and avoiding the dogmas.

When I was sixteen, I met a man who was to become an important factor in my life. He was my future father-in-law, Myron W. Glenn,  a true mystic and enlightened being. He introduced me to the AMORC Rosicrucian Order, the only real mystery school open to the general public at that time. I joined the order, and spent many years studying a broad spectrum of philosophies, comparative religions, Eastern teachings. My mentor guided me into intensive explorations of mysticism, with countless initiations and amazing awakenings among other disciplines. This study incorporated advanced teachings in child guidance, remote healings and in developing intuitive, psychic abilities. I meditated regularly.

On Friday nights in the Bay Area at that time, San Jose Junior College was the gathering place for the metaphysical community. Leading authors, teachers, astrologers listened to a popular speaker for two hours, then scattered across classrooms on the campus while skilled authorities shared their wisdom with all who cared to learn. The title of wisest mystic of all was given to a man named Peter Araujo Navarro, nicknamed “Peter the Great.”

Peter, a graduate of various mystery schools, was an electronics engineer working in the aerospace industry. When I met him at college, Peter had been studying for several years with a metaphysical teacher named Gene Savoy. In the face of repressive dictatorship, Dr. Savoy had smuggled the entire study course of the Mystery School of the Andes out of Peru. This feat was documented by Charles Kerault in a television special, “The Flight of the Feathered Serpent.” The teacher, Gene Savoy stayed at Peter’s house and gave workshops on these spiritual teachings. Peter, Della Heide, my daughter Carole Glenn and I studied with Gene Savoy for several months, learning many unique processes, which they have incorporated into their work. 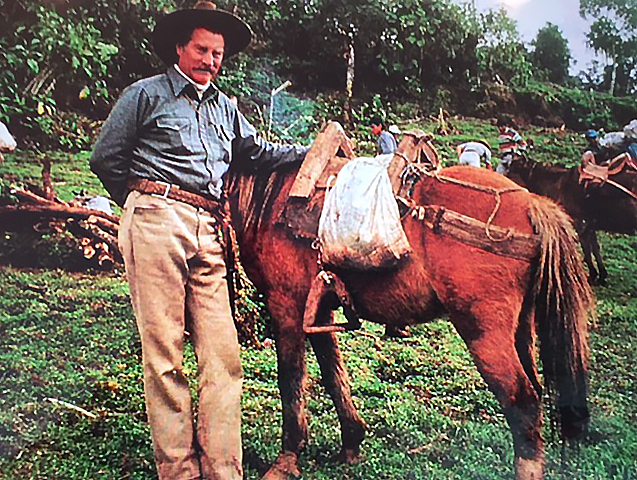 I attended Foothill College in Los Altos and Sonoma State University in Sonoma County. These were major metaphysical educational centers, where the leading spiritual instructors in the country held seminars and workshops. Taking 32 units a semester with a 4.0 (A) average, I completed my academic work. The fieldwork for my Master’s program was the foundation for the Illuminated Mind Seminars.

Peter Navarro and I became supportive partners in our metaphysical careers. We both completed Master’s Degrees in Transpersonal Psychology and Humanistic Parapsychology from Sonoma State University, and PhD’s in Transpersonal Psychology from Golden State University. Together we have accrued a vast background in spiritual exploration and activities. Very often, Della Heide and Carole Glenn accompanied us in our adventures.

For some time, we devoted considerable energy toward creating a spiritual community, a Center where many mystics could pool their talents and combine their skills. One product of this endeavor was the formation of our not-for-profit corporation, The Alohem Center for Transformational Studies. Peter and I traveled to Europe several times to establish liaisons with European metaphysical groups desiring affiliation with their centers. The resultant interactions produced a stimulating blending of wisdom and knowledge. Especially valuable were communications between The Findhorn Community in Scotland and Dr. Bruce Copen’s Metaphysical College in England.

One rewarding venture was visiting the stone circles in Europe, the centers for the Old Religion, and through powerful inspired ceremonies, bringing those centers into fine attunement with the new incoming spirituality.

I have taken groups to Europe to meditate with Mother Meera, to Hawaii, to New Zealand, to South America, to the Native American Sacred Healing Grounds in Montana.

As well as my academic studies, I have spent countless hours in workshops with leading spiritual teachers of our age.

My primary metaphysical focus at present is bonding with my most advanced graduate students periodically, channeling higher teachings, creating new workshops, writing three new books, and exploring the transcendent impact of group meditations. My work is unique and wonderfully exciting.

“Dr. June d’Estelle is an extraordinary 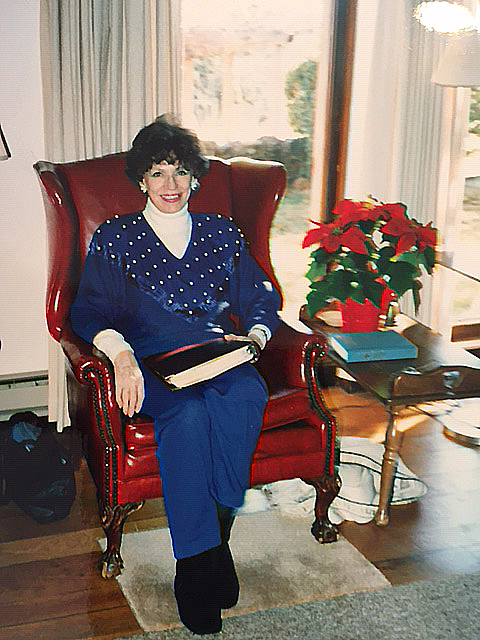 Continuing seminars, workshops and conferences, since 1970. Including extended study with many of the presenters. Instructors include: